In a recent article in the American Journal of Cardiology, a very silly recommendation was offered to combat the heart disease epidemic in the US - supply a drug as a condiment for your fast food meal!!!

There is no confusion in the medical world - Every Health Care professional understands that drugs are NOT the answer to the pandemics of suffering and disease in America.

Every Health Care professional understands the need for lifestyle change as the solution.  But there's a problem.  People simply aren't following their doctor's advice to "eat better and exercise" - and why should they?  This is today's topic - the problems with recommending a drug at the same time as offering advice.

There can be no solution from a system that gives advice to "eat more healthily" and also offers a pill to "counteract the harmful affects of eating unhealthily".

Here is an actual graphic from the journal article in the American Journal of Cardiology, simply amazing: 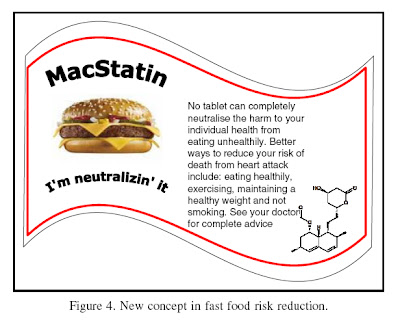 There can be no solution within this system.

In the article they explore the possibility of handing out statin drugs as condiments with your unhealthy fast food meal.  If a drug is offered to "reverse the effects", there will be no lifestyle advice taken seriously.  Period.  This is the very reason the medical system is a dismal failure at healthy lifestyles and preventing chronic diseases--the public simply does not take health care professionals seriously when they offer drugs at the same time they offer recommendations to change!  The signals are mixed. There's interference and it's not getting through!

Contributing to the problems with Medicine's management of chronic conditions is that the doctors are required to spend very little time with patients (and it's only going to get worse with Obamacare - cutting reimbursement to doctors will NOT result in more time and better advice to patients!).  All this being considered, we MUST understand that medicine has NO CHANCE at solving the MAJOR problems in America today where our health is concerned.

We need another approach!

Chiropractors are uniquely positioned to be the solution to the pandemics of chronic disease and suffering.  Our reliance on the body's ability to heal itself is paramount to the patient taking an active part in their own care!  This is the ONLY way we will overcome the amazing amount of pain, suffering and premature death in America today.  And compared with medicine, chiropractors are far superior at being able to offer lifestyle advice that the patient will actually follow (stretches, posture, exercise, specific supplements, specific dietary advice, etc.) with a lack of conflicting recommendations (drugs and lifestyle).

There are no mixed signals.  You do not go into a chiropractor's office thinking that a drug might be recommended during the course of the conversation.  We are Drug-Free!
Posted by Steve Perry at 9:53 AM No comments:

In Health, Love, and Freedom through knowledge - Steve Perry

http://www.infoviagra.net/statistics.html
Posted by Steve Perry at 5:49 PM No comments:

There's a fight going on

"New York City food stamp recipients spend an estimated $75 million to $135 million of their $2.7 billion in food stamps annually on soda, according to AP."

"As a nation, we’re subsidizing soda companies $4 billion annually through the food stamp program. In return, decades later, the public will be stiffed with the hospital bill for billions of dollars more for extra health care costs from these poor dietary choices."

In 2004, the USDA rejected Minnesota's plan to ban junk food, including soda and candy, from food stamp purchases, saying it would violate the Food Stamp Act's definition of what is food and could create "confusion and embarrassment" at the register.

But the government is unwilling to give it to them!  People are not being accurately taught the consequences of their choices.  People are being lied to and coerced and tricked into thinking that what they are doing has nothing to do with their sickness.  This has been the message of the corporations, the government, and medicine for the last 50 years!  That people are sick due to bad luck or bad genes, not bad choices.  The advertisement industry's main goal is to get people to buy their product no matter how bad it is for them.  They DO NOT advertise the real consequences of making these purchases repeatedly!

Maybe candy, sugar cereal, and other junk food commercials should be required to have warnings like in the drug commercials.  You know, the long list of side-effects (obesity, heart disease, cancer, diabetes...) that will come along with putting that poison into the cart at the grocery store.

The problem comes in when they have a complete disconnection between their choices and the consequences of those choices.  Most who buy sodas don't buy soda as one-time treat for the week as they did when I was growing up.


The problem is that people are disconnected from the 'why' to eliminate sweet from their daily regime.  People fail to see the reality which is that the craving for sweet in today's "food" atmosphere is the deadliest thing we have in America.  The absolute deadliest!

Most people crack a smile (you know out of the corner of their mouths) when they consume something sugary sweet or fried and say, "I know it's bad for me."  But these same people would NOT take a shot of cyanide with the same look on their face.  What's the difference?  One kills you fast, one kills you slow, but the understanding is completely lacking about the second.  People don't actually see this as being real.

The reason we fail to have an understanding of this are the mixed signals from government (The American Dietetics Association continues to claim, "There is no such thing as a 'good' or 'bad' food, and all foods can fit in a healthy diet.")  This idea is deadly because it completely misses the point that these things that people eat are not Foods at all!  The message from the government and associations like the ADA give completely wrong signals to the American people.  If the ADA really wanted to do something about the obesity epidemic and the Heart Disease, Cancer, Diabetes problems we have in the US, they would eliminate their connections to the contributers to these problems, namely, Coca-Cola, M&M Mars,

In order to try to solve the problem, these companies would have to actually attempt to SHRINK their own market share!!!  Did you hear that?  They would have to reduce their profits on purpose!  This can NEVER be appropriate in a capitalistic institution where money is the goal!  Make no mistake, they do NOT want to reduce their market share, if they did, they would quit the candy-making business altogether and go into health promotion.

If we had a more accurate definition of food, the problem would completely go away.

What people lack are:  1. An accurate definition of "food", 2. An accurate understanding of the REAL consequences of their choices, and 3.
When I look at my kids, the 'why' gets pretty big pretty fast.
Posted by Steve Perry at 10:39 AM No comments:

Dealing with your doctor

The escalating costs of drugs in this country is alarming and there are proven ways of accomplishing a better result without drugs.  Everyone who has watched the news knows there are side-effects to drugs, some of them very serious (death).  So,  if being prescribed a drug during a consultation with your doctor, make sure you guard your health.

If prescribed a drug, you could use all or a portion of the following dialogue:

1. "I'm not sure I need this prescription, do you really think I need it?"

The key here is to wait for an answer.  If the doctor really thinks you need it, (s)he will say so.  If (s)he thinks there is a better way that (s)he did not offer you thinking you might be too lazy to do it, you just got better care!

2. What are the side-effects of this drug?

3. How long are you prescribing it?

4. Is there some way I can reduce/remove the problem without the drug?

5. What caused this problem?

6. How can I (or my family) avoid future problems like this?  (ask for very specific things, general advice like "eat better" or "exercise more" does NOT help).

Reconnecting you to a beneficial relationship with your doctor naturally.

In Health, Love, and Freedom through responsibility - Steve Perry
Posted by Steve Perry at 1:02 AM No comments:

Definition: Namaste is a Hindi salutation or greeting. The word Namaste is a combination of the two Sanskrit words: nama, and te. Basically, nama means "to bow" and te means "you."

The hands are placed with palms together in front of the heart, the head is slighty forward and one bows in greeting to friends and strangers alike.

The interpretation is, "The divinity in me recognizes and honors the divinity within you." Isn't that beautiful?

What an amazing way to greet someone. The American handshake, which is a way to say "I'm unarmed," pales in comparison to the meaning and depth of such a profound introduction to someone you may or may not know.
Posted by Steve Perry at 6:15 PM No comments:

You could stop brushing your teeth, but why?

Now, I get asked all the time, "I love the fact that we're making progress with my spine, I'm moving better, and I'm standing straighter, I have more energy than I've had in years, but how long do I have to keep coming in to see you?"

The way I think about alignment and proper movement of the spine and other joints of the body is similar to the proper maintenance of your teeth. If you've lived your whole life u p to this point and never seen a dentist, you're probably going to come out of the office the frost time with a fair amount if work to do. Once you get the bulk of the problem fixed, should you discontinue care and expect to never have to see another dentist again? Or does it make more sense to maintain a regular schedule of check ups and do your part to prevent (spinal) cavities between visits?
Posted by Steve Perry at 8:53 PM No comments: